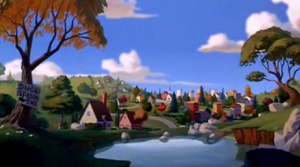 Tune Town is the city and the town where the Looney Tunes presumably live in their world.

When Michael Jordan entered Looney Tune Land, as named by Daffy Duck, he landed in the middle of Tune Town. There he was surrounded by most of the Looney Tunes, who are fans of his, and is the told the Tunes' situation by Bugs Bunny. He then went to their gym, where he encountered the Monstars.

The Tune Town of the original film appears in a flashback where Bugs explain that Al-G Rhythm convinced the other Tunes to leave the Tune World and going to leave in the Server Verse. Bugs refused but he eventually apparently accepted and he came to live in a Server Verse version of the Tune World.