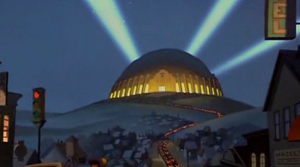 The Tune Stadium was the located where the big game between the Looney Tunes and the Monstars took place.

At the ultimate game the Looney Tunes, named the Tune Squad now go against the Monstars. The Tune Squad is unable to match the Monstars strength and skills on the court. With the Monstars knocking around the Tune Squad their spirits are broken. Michael unsuccessfully tries to pep talk them. Bugs gets an idea and pretends that a bottle filled with water is steroids although it is never called this. Giving this to his teammates they now feel as though they are ready to take on the Monstars. When the Looney Tunes prove more challenging to the Monstars than they first expected Swackhammer then instructs them to use any means to stop him. Acting on this the team is now significantly smaller with everyone injured.

The only remaining players are Bugs Bunny, Daffy Duck, Lola Bunny, and Michael Jordan. Marvin the Martian then tells Michael that they need another player or they will have to forfeit. Bill Murray eventually comes as a replacement and through the power of cartoon logic in the Looney Tunes' world Michael Jordan is able to stretch his arm long enough to score the winning point. Swackhammer, furious at the Monstars' failure, calls them that they are a bunch of losers and will never amount to anything. Bugs and Michael ask why they take that from him given their size. They say because "he’s bigger than...we use to be..." reminded of their new size, they strap Swackhammer on one of Wile E. Coyote’s rockets and send him to the moon. Afterwards with some hesitation they agree to give back the basketball player's talents and revert back to their Nerdluck forms. They then ask and decide to live with the Looney Tunes on their world.