Space Jam: Music from and Inspired by the Motion Picture is the original soundtrack album of the 1996 film of the same name starring Michael Jordan and the Looney Tunes cast. An album featuring the film's score by James Newton Howard was also released. The soundtrack was released by Warner Sunset and Atlantic Records on November 12, 1996. The worldwide hit "I Believe I Can Fly" by R. Kelly was first released on the soundtrack. 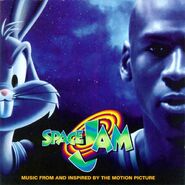