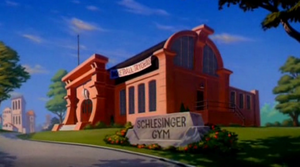 The Schlesinger Gym is the gym where the Looney Tunes held tryouts and started training for their basketball game presumably after the Nerdlucks turned into the Monstars destroyed the basketball court.

The Looney Tunes first arrived at the gym shortly after they brought Michael Jordan to their world. After seeing the condition of the gym Michael comments that it's a mess prompting the Looney Tunes to give it a spit shine.

The Monstars burst into the gym flaunting off their new size and try to pressure Michael to show them what he's got. Dissatisfied that Michael didn’t attempt to play basketball they turned him into one and showed their skills of using him as a basketball. After being called baldy by the Monstars Michael accepts the Looney Tunes and agrees to help them beat the Monstars.

Later when practicing in the gym, Michael notices the Looney Tunes lack of skill in basketball and ask, "Has anyone here ever played basketball?" suddenly, someone comments they have. Lola Bunny walks inside and introduces herself to which Bugs lust over her. After calling Lola "doll" a term which she finds offensive she challenges Bugs to one on one and easily beats him. She then walks to Bugs telling him not to call her doll and walks back out.

The gym is last seen after Bugs and Daffy brought Michael his sneakers and basketball clothes. Stan then appears as Michael is practicing and offers his help to the Tune Squad.