Production art can take many twists and turns and more than often an idea or design of a character or place is usually reworked or redesigned by this point. Below is production art that went into making 1996’s Space Jam.

Character Models or Character Model Sheets are Standardized renderings of characters, expressions, props and costumes. Character Designs would be created by concept artists or lead animators, and once they were approved, photographic stats, called Model Sheets would be produced and distributed to the various artists so that the art remains consistent.

Many of the final model sheets for various Looney Tunes characters that appeared in the film.

Model sheets from the past that were reused in the film. 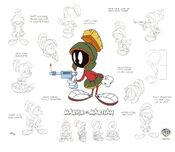 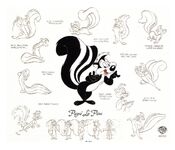 Cels are a transparent sheet on whichh objects are drawn or painted for traditional, hand-drawn animation. 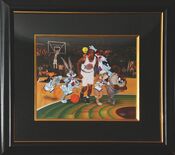 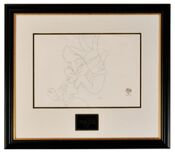 In this movie Honey Bunny was planned to be Bugs Bunny's female counterpart. Honey Bunny is a character that had appeared in Looney Tunes Dell Comics and had cameo roles in at least three Looney Tunes shorts. Although she was originally planned to appear in the film her character didn’t make it pass pre-production sketches. On these sketches we see an athletic rabbit with a bow on her head, wearing a dress referring to the flag of the United States of America. However, an artist who prepared those sketches drew Honey in so that she looked like Bugs' twin sister (another artist commented saying "is it just Bugs in drag?"). They decided to change her visual appearance.

A design for the renamed Honey Bunny.

After "four months of hard work" the character was ready. Lola Rabbit, as she was named at that time made problems for Warner Bros. because of her visual appearance resembling that of a teenager which caused reaction from McDonald's; who had signed a contract with Warner Bros. on selling Happy Meals with characters from Space Jam.

McDonalds’s had refused to sell Lola Rabbit toys and happy meal items if that was to be her final appearance to be used in the film on the grounds that it would be wrong to have Bugs Bunny paired up with what resembled a teenage boy.

Below is much of the early Lola Bunny art before her design and character had been finalized. 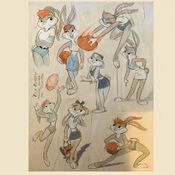 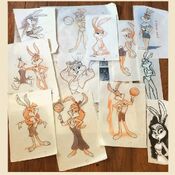 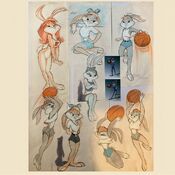 Sketches of Lola that later would later be her final model sheet.

In the wake of Lola Bunny's initial movie appearance, many "Looney Tunes" fans have noticed some differences between the character's appearance as seen in "Space Jam", and the design used in subsequent promotional images and merchandising: The "Space Jam" version of Lola has a powder-puff tail, rosy red eyelids, and slipper-shaped footpads. Her secondary fur color is a light tan, while her hair and tail are cream-colored. This appearance conforms to the animation model sheets used during the film's production.

This shows that Babs Bunny's design was thought upon while designing Lola as it says,“The new revised Lola is a little older, and a little more sophisticated and sexy looking. (Let’s try and lose about 35% of the Babs Bunny Look)

These would also fall in the middle as well, and were used in the film.

These would also fall in the middle as well, and were used in the film.

The "promotional" Lola has a teardrop-style tail similar to Bugs Bunny's, footpads that extend all the way around her feet (again, similar to Bugs'), yellow-blonde hair that extends down the back of her head, and her secondary fur color is white. This version of the character is the one dictated by the official Warner Bros. "style sheets" (first published in the "Space Jam Style Guide") used for merchandising purposes.

The art below was drawn by illustrator and animator Bob Guthrie.

According to artist Bob Guthrie , this was a rough sketch for a coworkers' teen at WBCP.

This would later be used in prints and shirts.

This art was later edited befroe being redistributed due to Lola's appearance.

Every one of these were recycled for print.

This would later be reused for print as well. 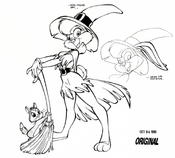 This would later only be heavily marketed overseas but not in Western or Southern areas.

This is one of the few that was not recycled for print.

This had a limited to no print outside of designs. 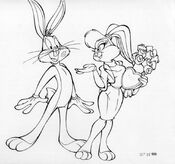 This had a limited to no print outside of designs.

This was later used in prints...

The one on the left features a promotional Lola that would be used in limited prints.

The pose at the bottom refrences an early Lola sketch.

A pose of Lola probably created for the aims of Halloween.

They also had Promotional Production Art, which was art that was made for Lola that used the promotional version of her design before the update.

This model sheet would become the basis for Lola's design outside Space Jam.

This would also be used in Lola's "post Space Jam" design.

The art on this model sheet would later be recycled for Lola Bunny prints.

This is a larger construction sketch of a pose used in a promotional production model sheet.

This is a rough sketch with animators notes...

...This is a finished drawing by Guthrie based off of that sketch.

This is a drawing by Guthrie meant to be used as a refrence.

Much of the art here would also be reused.

This art would later be edited and reused as the exposure wan't allowed in animation.

This is another promotional production art picture.

This is an early promotional Lola.

This pose is based off an early Lola Bunny drawing.

The following are scenes that were planned out before being animated. The scenes that required the most planning was scenes where Michael Jordan and a Looney Tunes character interacted.

The scene where Bugs refers to himself as a shakespearean actor is below.

Michael is filmed against a "green screen" , with a live actor, dressed in green, standing in for Bugs Bunny. This served as placement for the artist animating Bugs.

This is Rough Animation, the traditional two-dimensional version of Bugs. Animation artists drew this over the stand-in. The green suit and green background will later be erased during compositing.

Assistant Animation (also known as clean-up animation) replaces the rough sketch with solid lines so that it can be scanned digitally into the computer, where it will be "inked" and "painted."

Rough Effects Animation is created to give Bugs the three-dimensional quality which will bring him to life with shading, highlighting and texture

The composite of the shot has a live Michael Jordan and a three-dimensional Bugs Bunny interacting as if, alas, they know each other well.

During the big game, Elmer Fudd and Yosemite Sam get together for a brief homage to Quentin Tarantino. Here are some of the preliminary sketches of the sequence.

...Elmer looks back at Yosemite.

...and Elmer Fudd does the same.

The wide-angle view of the gun barrels is drawn separately.

The sketches are composited with the computer-generated basketball court to complete the shot.

The following sketches were used when coming up with expressions and action poses for the Nerdlucks and Monstsars.

Art made during the creation of the Nerdlucks.

Various designs that were used in the film. 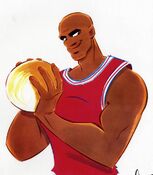 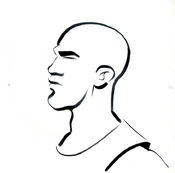 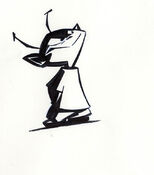 Storyboards are a sequence of drawings, typically with some directions and dialogue, representing the shots planned for a movie or television production.

A painting or other artwork over which a series of animated cels is photographed to make up a scene in an animated film.

The sketches and desings of backgrounds to be painted later.

This is the scenes or sketches of what was planned to be scenes in the film that didn’t make it to the film.

This scene would've been when the Monstars were attacking other players...

This was a scene where Bugs would've tried to use pity to get Lola's attention.

This is a scene where apparently Bugs tried to prank Lola.

This was the original idea for how the fantasy sequence would’ve taken place. The fantasy sequence occurs after Michael offers Swackhammer to take him to Moron Mountain should the Tune Squad lose the game. The sequence was designed and directed by Dino Athanassiou/Rob Stevenhagen.

These are designs for the movie posters pictured above. Many of these went through some changes before they reached their final product. 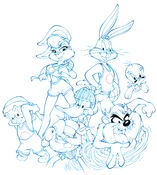 These are posters that were made not for theatrical promotion but for collectors.