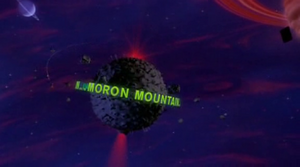 Moron Mountain (Finnish: Vellimäki) is an amusement park that was introduced in the film Space Jam. Its owner is Mr. Swackhammer.

Moron Mountain is shown to be a gray planet with large neon green sign around it. The entrance to the amusement park has a sign that resembles Swackhammer's face.

His plan fails and after time and time again of abuse the Nerdlucks turned into the Monstars strap Swackhammer to a rocket and send him to the moon. The Nerdlucks then decide to stay on earth with the Looney Tunes. It is possible that Moron Mountain was shut down and turned back into a regular planet.

The entrance to Moron Mountain