Michael Jordan, who appears as himself, makes his motion-picture feature debut with "Space Jam." Widely considered the greatest basketball player in history he has parlayed an incredible college and professional career with the North Carolina Tar Heels and the Chicago Bulls into a position as an American icon and one of the most recognized personalities, sports or otherwise, in the world.

Jordan's list of basketball accomplishments is unparalleled in the history of the sport: member of North Carolina's NCAA championship team in 1982 and Atlantic Coast Rookie of the Year; NCAA player of the year and All-American in 1983 and 1984; co-captain of the United States' gold medal-winning team in the 1984 Olympic games; NBA Rookie of the Year and scoring leader in 1985; NBA's Most Valuable Player in 1988, 1991, 1992 and 1995; second NBA player in history to score more than 3,000 points in a season; member of 10 NBA All-Star teams; NBA's scoring leader for eight seasons, seven consecutively; holder of the league's best career scoring average -- 32.3 points per game; member of the "Dream Team" that won the 1992 Olympic gold medal; earned NBA Finals' MVP honors in each of the Bulls' championship seasons: 1991-93, 1996-1998; named to the NBA All-Defensive team seven times; voted 1988 NBA Defensive player of the Year; selected for the All-NBA first team eight times; named NBA ALL-Star Game MVP in 1988, 1996; and scored NBA playoff record 63 points vs. Boston in 1986.

After playing one season with the Chicago White Sox AA affiliate, the Birmingham Barons, Jordan rejoined the Chicago Bulls and, in the 1995-96 season, led his team to another three NBA championships, won the league's scoring title, and was again named Most Valuable Player of the Year and of the NBA All-Star Game.

Jordan retired for a second time in 1999, but returned for two more NBA seasons from 2001 to 2003 as a member of the Washington Wizards.

As a youngster, Michael immediately became interested in sports. However, it was baseball not basketball that was his first love. He would play catch in the yard with his father, who loved baseball. He soon started to play basketball to try and follow in the footsteps of his older brother, Larry, whom he idolized growing up.

At Laney High School, as a sophomore, he decided to try out for the varsity team but was cut because he was raw and undersized. The following spring, he grew four inches and practiced tirelessly. The hard work paid off as he averaged 25 points per game in his last two years and was selected to the McDonald's All-American Team as a senior.

Following high school, he earned a basketball scholarship from North Carolina University where he would play under legendary coach Dean Smith. In his first year, he was named ACC Freshman of the Year. He would help lead the Tarheels to the 1982 NCAA Championship, making the game-winning shot.

After winning the Naismith College Player of the Year award in 1984, Jordan decided to leave North Carolina to enter the NBA draft. Although he decided to leave college early, he would later return to the university in 1986 to complete his degree in geography.

In the 1984 NBA draft, he was selected with the third overall pick by the Chicago Bulls. As a rookie for the Bulls, he made an immediate impact, averaging an amazing 28.2 points a game, including six games where he scored 40+ points. He was selected to the NBA All-Star Game and named Rookie of the Year. This would just be the beginning of a career filled with awards and accolades. In the upcoming years, he would go on to win five regular season MVP awards, six NBA championships, six NBA finals MVP awards, three All-Star game MVP awards, and a defensive player of the year award.

In 1993, tragedy struck Jordan's seemingly perfect life. On July 23, 1993, his father, James, was murdered off Interstate 95 in North Carolina. Two locals had robbed him, shot him in the chest and threw his body in a swamp.

Three months later on October 6, 1993, following a run of three consecutive NBA championships, Jordan announced his retirement from basketball citing that "he no longer had the desire to play." Now "retired" at age 30, it was uncertain what Jordan would do next. Would he take a year off out of the public eye to grieve and then come back to the Bulls? Would he go out and look for a white collar job in the field of geography, his college major? Or would he take up a completely different hobby like golf?

In early 1994, Jordan decided to take up a new hobby alright. However, it wasn't golf. It was baseball. Despite not playing baseball since high school some 13 years ago, he signed a minor league contract with the Chicago White Sox in 1994. He played one unspectacular season for the Double-A Birmingham Barons.

On March 18, 1995, Jordan, a man of few words since his retirement, sent two important words to media sources everywhere: "I'm Back". He celebrated his return to the NBA by doing what he always did best: winning. Although the Bulls would lose in the playoffs to the Orlando Magic, it was obvious that Jordan was still the same superstar player. He would go on to lead the Bulls to three more consecutive NBA championships and etch his place in the history as the "NBA's greatest player of all-time".

On January 13, 1999, Jordan re-announced his retirement, saying that "he was 99.9 percent sure that he would never play again". Soon after, Jordan became part owner of the Washington Wizards.

Near the start of the 2001-02 season, there were hints that Jordan may try another comeback to the NBA. On September 25, 2001, Jordan confirmed those rumors, announcing that he would once again return to the NBA as a member of the Wizards. His two seasons in Washington were mediocre at best. His statistics were solid and he showed some flashes of his old self but he could not lead the Wizards to the playoffs and missed several games due to injury. He retired for good following the 2002-03 season and was subsequently dismissed as president of the Washington Wizards.

In June 2006, he became part owner of the Charlotte Bobcats. Later that year, he filed for divorce from Juanita, his wife of 17 years. They have three children together.

Michael decides to retire from Basketball and decides to become a Baseball player. He gets a new bodyguard, an energetic and goofy man named Stan Podolak. He also watches in TV that his NBA friends are losing their talents.

Later, he's playing Golf with Larry Bird and Bill Murray. Bill asks Michael if he could become an NBA player since his friends are losing their talents but Jordan answers that he's not fit for the game. When Stan wants to photographate jkm while he takes the ball Michael gets sucked down the hole.

He finishes in an underground world habituated by the Looney Tunes and he has a meeting with Bugs Bunny that reveals him that they dragged him down there because some aliens came from space and wants them as their new attractions in their amusement park, since they were small they tried to make fools of them by having a basketball game with them but they became huge monstars (calling themselves Monstars) and they need his help.

After meeting the attractive yet strong Lola Bunny, which Bugs falls in love with, that joins the team, Michael asks Bugs and Daffy Duck to bring his snickers from his home so he can play better.

Stan succeeds to come down into the Tune World and hugs Michael relieved to see he's okay. That night, Michael and the Tunes prepares for their round against the Monstars.

In the first round the Monstars cheats and easily beat them using phsycal violence towards them. Stan discovers that the Monstars stole the talents from the NBA players which explains how they became like that and what happened to Michael's friends.

Bugs takes some water and says that it's Jordan's secret stuff which makes the other Tunes believe they're invincible giving them the confidence they need to win.

During the second round the Tunes go hard on the Monstars and they finally win but the boss of the Monstars, Mr. Swashmacker asks for time out. Michael offers him a deal, if they win they will give his friends their talents back and if the Monstars win they get him as their new attraction for Moron Mountain for the rest of his life. In the third round both Michael and the Tubes gets heavily injured and defeated by the Monstars and lose their confidence again.

However, thanks to the help of Stan and the arrival and partecipation of Bill in the game, the Tunes gets their redemption in the third round with Michael successfully making his arm longer to win after learning the physical rules of the Tune World.

After the Tunes's victory, Mr. Swashmacker is mad at the Monstars for their failure and trirs to break their deal ordering them to go in his spaceship. Michael asks the Monstars why they let him treat them that way and the Monstars tells him that he's bigger than them until they realize that they're bigger than him and they turn on him using one of Wile E. Coyote's rockets to send him in the moon.

Then the now reedemed Monstars gives Michael the NBA players talents back thus returning to their original forms and deciding to remain in the Tune World. Michael says goodbye to the Tunes and comes back to his world with Stan using the spaceship.

At the end Michael enters to his Baseball game, gives his friends their talents back and he decides to come back to be a Basketball player.

Michael doesn't appear in the sequel but he's mentioned a couple of times. When LeBron James asks Bugs to help him to win a Basketball Game he talks to the audience breaking the fourth wall and says "Sounds awfully familiar" referring to his experience with Jordan. The same thing happens when Bugs asks Lola how many times she has the occasion to play with an NBA superstar and Lola answers that she already did that.

During the interval of the final game, Sylvester says that he found Michael Jordan but it turns out to be the actor Michael B. Jordan, much to the Tunes's disappointment and dismay. 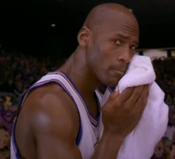 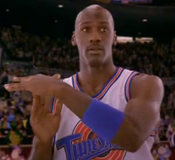 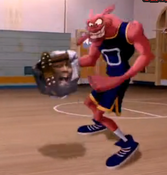 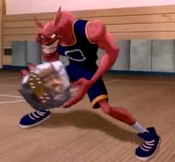 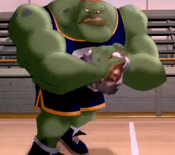 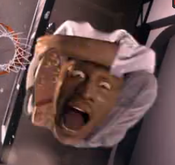 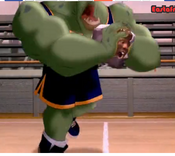