Lola Bunny is Bugs Bunny’s beautiful, sassy, and no nonsense girlfriend. According to Kevin Sandler in Reading the Rabbit: Explorations in Warner Bros. Animation, she was created as "female merchandising counterpart" to Bugs Bunny. She first appeared as Bugs Bunny's girlfriend in the 1996 film Space Jam.

Since Space Jam, Lola has appeared in most Looney Tunes projects such as television spin-offs, video games, comic books and merchandise. In most post-Space Jam media she is depicted as she was in this film.

In this film Lola Bunny was planned to be Bugs Bunny's female counterpart. She was preceded by Honey Bunny, a character who had appeared in Looney Tunes Dell Comics and had cameo roles in at least three Looney Tunes shorts. Although she was originally planned to appear in the film her character didn’t make it past pre-production sketches. On these sketches we see an athletic rabbit with a bow on her head, wearing a dress referring to the flag of the United States of America. However, an artist who prepared those sketches drew Lola in so that she looked like Bugs' twin sister another artist commented saying "Is it just Bugs in drag?". They decided to change her visual appearance, and in the process Honey was replaced by Lola.

A design for the renamed Honey Bunny.

After "four months of hard work" the character was ready. Lola Rabbit, as she was named at that time made problems for Warner Bros. because of her visual appearance resembling that of a teenager. This caused a negative reaction from McDonald's, who had signed a contract with Warner Bros. on selling Happy Meals with characters from Space Jam.

McDonalds’s had refused to sell Lola Rabbit toys and happy meal items if that was to be her final appearance to be used in the film on the grounds that it would be wrong to have Bugs Bunny paired up with what resembled a teenage girl.

Chuck Jones, a famous animator and director of many well-known animated Looney Tunes shorts, helped (or rather tried to help) artists working on "Space Jam". However, all his suggestions were rejected.

In one of later interviews he stated that, in his opinion, Lola Bunny is a character with no future, she's a totally worthless character with no personality. He didn't like Lola or the idea and comedy of "Space Jam" at all. His opinion was shared by Maurice Noble, an artist who created visual backgrounds for many animated shorts directed by Jones.

Although another of famous animators working on animated shorts with Bugs Bunny and his friends, Isadore "Friz" Freleng, didn't get to see the "Space Jam" (Freleng died in 1994), though he did give his opinion about pairing Bugs Bunny with women. In one of interviews he gave in middle 1980's, when asked about why Bugs Bunny doesn't have a girlfriend, he stated that Bugs "wouldn't be the same troublemaker".

In the meantime, however, Freleng created a few sericels in which we see Bugs Bunny showing his emotions to Honey Bunny. Freleng was speaking about a girl that would change Bugs Bunny's personality or "domesticate" him. “If Bugs Bunny appearing along with female counterpart would remain the same crazy and intriguing character, then there would be no problem.”

Lola first appeared in the 1996 film Space Jam. She is shown with tan fur, blonde bangs, and wears a white tank-top, blue shorts and a matching blue rubber band on both ears like a ponytail. She has aqua blue colored eyes. Lola is voiced by Kath Soucie in the film.

Lola's basketball skills get her a spot on the Tune Squad, in which the Looney Tunes characters battle the villainous Monstars for their freedom, with help from Michael Jordan. She is the second best player on the Tune Squad team, the first being Jordan himself.

Although she initially turns down Bugs' advances, her feelings shifts to affection after he saves her from a belly-flopping Pound, getting himself painfully squashed in the process (showing that he is willing to put himself in harm's way for her). Acting on these feelings, she kisses him and near the film's end, becomes his girlfriend.

Lola also has a main role in The Looney Tunes Show, voiced by Kristen Wiig. Compared to her "trophy girl" personality in Space Jam, her personality differs greatly in this show.

In The Looney Tunes Show, Lola Bunny is Bugs Bunny's beautiful, bubbly girlfriend. Lola talks a mile-a-minute, can be absent-minded on occasion, and has a way of getting what she wants. She values her love for Bugs greatly, and will go at any length to see he feels the same for her. Going far into seeking him out when he's not responding to her and will do anything, even if it puts her own life at risk just to be with him.

Although she sees Bugs as something of a saint and a "bad boy" combined and appears attracted to his appearance, intelligence, and his personality, Lola is not above criticizing his cross-dressing habits, finding his female disguises incredibly ugly. She even tried to keep him out of her family photo because she thought his chipped tooth would ruin it. While most likely not unintelligent and nonathletic, Lola's enthusiasm also causes her to be unfocused in sports, and confuse certain things with others.

While post-Space Jam media used Lola's promotional design to design her, The Looney Tunes Show based their design of Lola on a toonier version of her appearance in Space Jam.

An infant version of her, voiced by Brit McKillip. McKillip would later portray a character outside of the Looney Tunes franchise, and is among the regular characters of Baby Looney Tunes. Like her older counterpart, she has tomboyish traits and an affinity for basketball. She is also much more childlike and emotional in her personality given her young age.

Other appearances include her role as the reporter in the direct-to-video film Tweety's High-Flying Adventure. She also appeared as a playable character in the video games Bugs Bunny & Lola Bunny: Operation Carrot Patch (1998) and Looney Tunes Racing (2000). She was also a news reporter in the game Looney Tunes: Space Race (also 2000). Her lines in Space Race are "And they're off", and "Hello is this thing on?"

In the action comedy Loonatics Unleashed, her descendant is Lexi Bunny, who seems to be the first in command of the Loonatics team over Ace Bunny (the descendant of Bugs). She seems to have inherited her ancestor's athletic prowess and general witty and no-nonsense attitude along with her seductive charm.

Lola Bunny was also featured in a Looney Tunes webtoon, on looneytunes.com, entitled "Dating Dos And Don'ts." During this webtoon, in the form of a fifties educational film, Bugs Bunny attempts to take Lola out on a date, but Elmer Fudd and Lola's disapproving dad (voiced by Tom Kenny) are all that stand between him and his date. The short ends with Elmer crashing on top of Lola's dad, and Lola continuing to kiss Bugs passionately.

A mascot version of Lola Bunny in her Space Jam Tune Squad uniform helped debut the Women's National Basketball Association in 1997 appearing at their inaugural game between the New York Liberty and the Los Angeles Sparks in Inglewood, California.

Lola was the main character of the 2015 made-for-video feature Looney Tunes: Rabbits Run, in which she was voiced by Rachel Ramras.

In the wake of Lola Bunny's initial movie appearance, many Looney Tunes fans have noticed some differences between the character's appearance as seen in "Space Jam", and the design used in subsequent promotional images and merchandising:

The reasons for the change in Lola’s appearance between movie and merchandising are unknown. However, it would seem that Warner Bros. considers the “promotional” Lola the official design, as that is the one used in merchandising and animation.

The writting about Babs can be seen at the top middle section.

This is art that showed what Lola would look like as she appears in "Space Jam".

“The new revised Lola is a little older, and a little more sophisticated and hot looking. (Let’s try and lose about 35% of the Babs Bunny Look)"

In early concept art it reveals that Babs Bunny, a rabbit character from Warner Bros Tiny Toon Adventures design, was discussed while designing Lola Bunny. In the art above, production notes Lola’s change in appearance from promotional designs to the one used in Space Jam.

Lola's personality is a combination of the Hawksian woman, tomboy and femme fatale archetypes. She is a tough talking, no-nonsense woman (as displayed by her reactions to being called the term "doll," which gradually disappears by the time A New Legacy rolls around.) She is highly athletic (easily the best player after Michael Jordan himself). She is also incredibly seductive in her behavior, quite capable of easily charming men around her (as displayed with the other Looney Tunes in her first appearance in the movie but with none more so than Bugs Bunny himself, her eventual boyfriend). 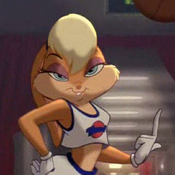 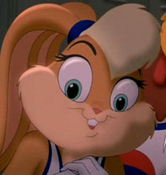