View source
watch 01:40
The Sandman Will Keep You Awake - The Loop
Do you like this video?
Play Sound

Dee Bradley Baker (born August 31, 1962) is an American actor, voice actor, singer, and comedian. He has voiced Klaus Heisslerand Kisses in American Dad!, Perry the Platypus in Phineas and Ferb, and other various characters including Squilliam Fancyson and Bubble Bass in the TV series SpongeBob SquarePants, Nightcrawler in X-Men: Legends and Marvel: Ultimate Alliance.

His voice-work also includes Avatar: The Last Airbender, The Legend of Korra, Codename: Kids Next Door, Cow and Chicken, Adventure Time with Finn and Jake, Batman: Arkham City, the Ben 10 franchise, Star Wars: The Clone Wars, Halo, Gears of War, Portal 2 and Left 4 Dead 2. He has played the roles of Elmer, Sanjay and Binky, in the Nickelodeon series, The Fairly OddParents.

Baker was born in Bloomington, Indiana, and grew up in Greeley, Colorado. He started performing at age 9 and steadily worked in musicals, operas, plays, and stand up until college. He graduated Colorado College in Colorado Springs, after studying Philosophy, Biology and German. He worked as a stage actor, stand-up comedian, and singer after college, which led him to Los Angeles where he established his career as a voice actor.

In addition to voice acting credits, Baker has appeared on game shows such as Legends of the Hidden Temple (which was also his debut role in voice acting (credited as "Dee Baker")) and Shop 'til You Drop. In 1999, he voiced the "Pig George" in the movie My Brother the Pig. In 2007, he is the voice of Captain Jack Sparrow's talking parrot in the newly refurbished Pirates of the Caribbean rides at Disneyland and the Magic Kingdom.

He is known for his role in the series Avatar: The Last Airbender as Appa, Momo and various other voices and came back for the sequel series The Legend of Korra as Naga, Pabu, Oogi, council member Tarrlok and United Nations commander Bumi. Baker is also known for his voice role as the Clone Troopers in the TV series Star Wars: The Clone Wars, and all of Ben's aliens in Ben 10: Alien Force and Ben 10: Ultimate Alien. He is The Voice of Gossamer in Space Jam A New Legacy 2021.

He resides with his wife Michelle and their two daughters Josie and Cora in Los Angeles. 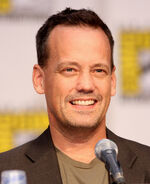 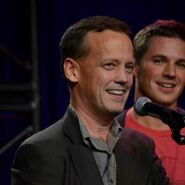