View source
watch 01:40
The Sandman Will Keep You Awake - The Loop
Do you like this video?
Play Sound

Catherine Reitman is an American actress and film critic.

She starred in the television series The Real Wedding Crashers, based on the hit movie Wedding Crashers. Her feature films include 2007's Knocked Up and 2009's I Love You, Man. She can currently be seen on the Starz original series "Hollywood Residential" and as Maureen Ponderosa on It's Always Sunny in Philadelphia. Previously, she appeared as Henrietta on How I Met Your Mother in the episode "Hooked".

In January 2011 she launched Breakin’ It Down with Catherine Reitman, a movie review web show on YouTube, produced by Candor TV, part of Candor Entertainment. She occasionally fills in for Kevin Smith as a guest co-host with Ralph Garman on their podcast, Hollywood Babble-On. Catherine made a guest appearance in the final season of Weeds. 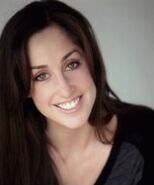